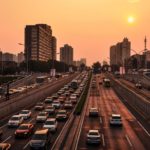 Do you ever get home from work and feel like not only was it a hot day, but you felt like the air was gross too? You are not the only one. Pollution can be the culprit of your issue. North Texas is growing and for the most part, that is a good thing. One of the problems with economic growth is that it comes with more ICE (Internal Combustion Engine) vehicles. These are cars that use gas powered engines to operate. These types of vehicles emit Carbon monoxide. This is a poisonous gas that can get people sick.

Some people are combating the issue by purchasing electric cars. Up until now, they used to be expensive, but now, almost every car producer is coming out with an electic model or two. Sure there is the argument that electric cars still produce Carbon monoxide because your electricity comes from coal, but the truth is, they emit less than normal ICE cars that burn gasoline. Not only that, but much of North Texas energy is now produced by wind farms which helps to bring that Carbon monoxide emission number down on average. If your house has solar panels on top, you actually eliminate that Carbon monoxide emission completely.

Carbon monoxide is a real problem in a growing city like Dallas, Texas. Think about ways you can lower your Carbon monoxide output. Maybe an electric car is not the right way for you. You could also try to carpool, or catch a ride on the DART.