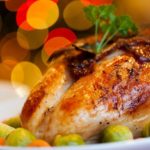 November 21st is National Stuffing Day! Does your family refer to this delicious Thanksgiving side as stuffing or dressing? Although many people believe that this debate is simply one of names (similar to the pop versus soda debate), there is actually a difference according to culinary professionals! Though they are extremely similar in ingredients and end result, the technical difference between the two is that stuffing is traditionally cooked inside of the Thanksgiving turkey (or other protein) while dressing is traditionally cooked on the stovetop. However, this culinary distinction is often ignored in favor of the terminology used based on geographic location. Those from the northern and northeastern states may call both preparations stuffing, while those further south may feel very strongly that the dish is called dressing, no matter how it was made! Butterball released a map in 2015, categorizing states as either stuffing or dressing states – Texas was designated a dressing state! Do you agree? No matter which side of the debate you are on, we hope you enjoy indulging in this dish with your Thanksgiving meal. Consider preparing your dish with plenty of chopped carrots, celery, onion, and mushroom included for an extra healthy burst of nutrition in an otherwise starchy side.