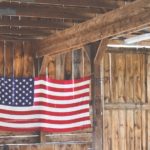 June 14th is National Flag Day! We celebrate today in commemoration of the adoption of the American Flag on this day in 1777. Our flag is a national symbol that has represented independence and unity among Americans for 240 years now. Since its origin in 1777, our flag has seen 26 changes. Some of the most memorable changes include the 48-star flag that lasted for 47 years, the official reveal of the 49-star flag on July 4th, 1959, then the switch to the 50-star flag in August of that same year. President Eisenhower was given over 1,500 designs that August and chose the design that we still fly today! The famous red, white and blue colors of our flag all represent specific traits that our country takes pride in. The white stripes represent purity and innocence, the red stripes represent hardiness and valor, and the broad, blue band represents vigilance, perseverance and justice.

Take pride in the origin of our great American flag and fly it high today!