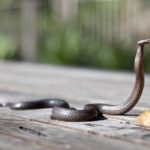 As the weather warms up for summertime in North Texas, children seem to spend a little more time outdoors. It is important for parents to know what to educate their children on while playing outdoors. Though the Dallas/Fort Worth area is covered by suburban areas, there is still plenty of wildlife scattered across the metroplex. One species that many people come across is snakes. Though many snakes that many people come across are not venomous, people seem to kill them out of fear. This fear comes from the general assumption that all snakes are dangerous. As we will go over how to determine whether a snake is venomous or not, we will also go over how to avoid situations that will result in your harm or the snake’s harm.

First we will go over how to determine whether a snake is venomous. There are really 3 main features to look out for when identifying a venomous snake. The main one being the shape of it’s head. It is actually a myth that only venomous snakes have arrow pointed heads, as that is quite a broad description for people to determine as many snakes have pointy heads. What distinguishes a venomous snake’s head shape is the broadness of the back of its head in comparison to its neck. Their heads are very broad toward the back and have a sharp angle at the neck where it is much skinnier than the head. This is the arrow shape that is often misconceived. Nonvenomous snakes’ heads seem to almost have the same girth where their heads meet their necks. Another distinguishable trait is their nose. A venomous snake has a pointed nose that is angled upward whereas a nonvenomous snake’s nose is typically rounded downward. The last trait to look for is in their eyes. Venomous snakes have elliptical pupils versus nonvenomous having rounded pupils. As there are a few more distinguishable traits, these are 3 of the most obvious ones for people to look out for.

Now, if you or your family member come across one of these snakes, leave it alone! Many people kill snakes out of fear, but don’t realize that a snake is minding its own business. You are more likely to get bitten by a snake in the midst of attacking it versus walking around or away from it as they only bite out of fear. If you are going to be in brushy areas where they may not be as visible, wear high boots and have a cell phone ready just in case you unknowingly step into one that bites. If you can avoid these areas in general though, that will be your better option!