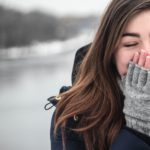 Symptoms for a cold are not hard to miss. They include a scratchy throat, a stuffy nose, sneezing, and an overproduction of mucus on top of other things. It is caused by a virus, and can leave your body feeling drained as most of your energy is directed at fighting it off. Children are more susceptible to getting a cold due to their bodies still developing stronger immune systems. They are also at a higher exposure rate while they are at school during the day. Though it is more common during winter and fall, the common cold is not directly caused by the temperature dropping. It is indirectly caused due to the amount of people staying inside for warmth, therefore exposing themselves to others in confined spaces while indoors.

A cold can last from 7-10 days, so it can really impact your productivity for a good week or so.  Treating one isn’t too tricky. Dry air can dry out your nose, which leaves it prone to infection, therefore we suggest keeping a humidifier on site while recovering from your symptoms. Since your body will be directing so much of its energy toward the immune system to combat your sickness, our family doctors suggest that you rest to give your body ample time to fight off the virus. Drinking water is also very helpful to combat the cold. Drink plenty of fluids throughout the day to keep your body hydrated, and you will recover much faster! If symptoms last longer than 10 days, come see one of our family doctors and we will get you back on your feet in no time!