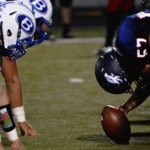 School has officially begun, and so have extracurricular sports. If your family actively participates in school athletics, it is important to understand the prevalence of concussions that occur in active young athletes.

A concussion is a brain injury that is caused by some sort of trauma to the head. A direct blow to the skull or violent shaking can cause concussions. They are a direct result of the brain making contact with the inside of the skull. They can result in symptoms such as headaches, confusion, nausea, fatigue, and even memory loss. Some symptoms lie dormant and do not show up until hours later such as irritability, loss in concentration, sensitivity to light and noise, trouble sleeping, and depression.  They can also cause a loss of consciousness, but are more often unnoticed. Concussions can also result from player contact with each other, a hard fall or even blow to the head from a ball. They are especially prevalent in football and many other contact sports such as hockey and soccer. High school football holds the highest percent of concussions out of any sport in the United States at a enormous 47%. We all know how important high school football is to our North Texas culture, so everyone needs to be aware of the dangers of concussions!

Always check for symptoms in your children when they come home from practices or games. If you notice any, contact one of our family doctors as soon as you can. Remember the importance of being aware of concussions now that school sports have begun once again, and always know that your family’s health is our number one priority!